WE SACRIFICED OUR PERSONAL NEEDS FOR STUDIO SESSIONS– FLE 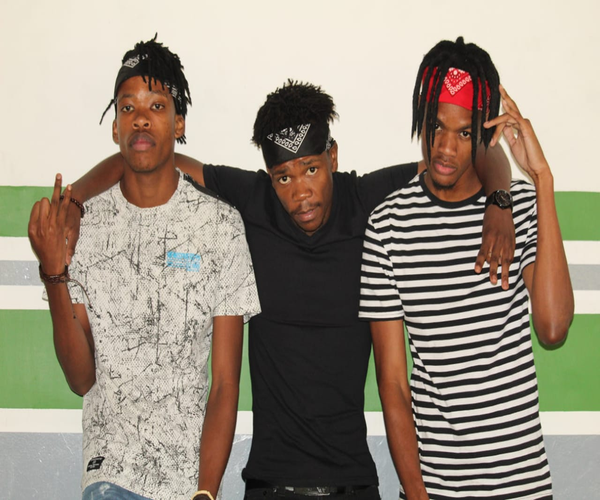 Four lyrical Emcees( F.L.E.) is the longest crew ever in kuruman Hip-Hop , they started off as friends and it was the love of hip hop that brought them together for that they achieved a lot together and worked with many well known rappers in kuruman.

When did you guys start  with music and how long it has been now?

F.L.E. establish in 2014 , we were friends before but we were doing music individually the target was to build F.L.E. crew so we can be somewhere and its been 5 years now.

With all genres of music why specifically hip hop  and what inspired you there?

Paci—hip hop its something I grew up listening to and my uncle used to play it almost everyday , I got the inspiration from there and I started doing it

How did the EP come about ?

3 for all is a project we being working on for long past 2 to 3 years  pity we just released it now it was a struggle to us buying music equipment to record, We started as four members and we called ourselves Four Lyrical Emcees , it was on 2018 when one of our member decided to go Solo it was only 3 0f us left which ended up raising some questions because we were calling ourselves four lyrical emcees now there's 3 of us , the questions were like are we changing the crew name or ending the crew it took us while to decided to stick with F.L.E. because  that’s  how people know us . That’s what inspired the EP we talked about the experienced we had to dealing with on that time.

What are the challenges you have experience during the journey of your music and the forming of your album?

Studio time was the main problem we used to record at Kagung which required a lot of cash and there was this guy by the name of cheezyT, he was one of the guys that knew how to made beats back then. It was a challenge for us  because we were all staying in 7 miles we had to make sure that we have money to go to Kagung and pay for the studio. That time we were still in school, so it was a challenge for us  because we ended up sacrificing our own personal things to pay for our studio timing.  In terms of events, when we were booked, we did not get paid, because we were working towards  building our fan base. We had to do  gigs for free. We had to travel all night with no money. Sometimes, we even walked to the events.

We also fought over beats selection. Its not an easy thing to work as a group. Every decision we take, we have to consult others.

What inspired you to put that EP together and who did you work with?

The EP has phase 1 and 2 .  Phase 2 is a mixtape. It was supposed to come up in hard copies and it will still come. It consist of 13 tracks  we worked with various artist  like AV, Shattanotch and young bee so far.

What is the underlining message that you trying to convey through the EP?

On this EP it touches different aspects of life we live. there's been gangsterism, and our sisters are being raped. People are dying and being killed. We have songs like Stop Em and Sis wam which is about a young lady and we rise awareness

we have new age lunacy  and another stop  em which talks to the brother to stop one another for doing bad things, basically it is inspired about our personal aspects.

What Is your input on the world of  Hip-Hop right now regarding performance delivery and impact?

Due to our consistence in past five years kids are now interested in doing Hip-Hop they are doing this because they saw us doing it. We can say they got inspiration from F.L.E.  And when its time for us to perform we go out there and kill it.

Whats your plan for the future regarding your career in music and who you guys plan to work with?

In coming five years we would like to work with Cassper Nyovest and Anathi.

Whats your final say to the fans?