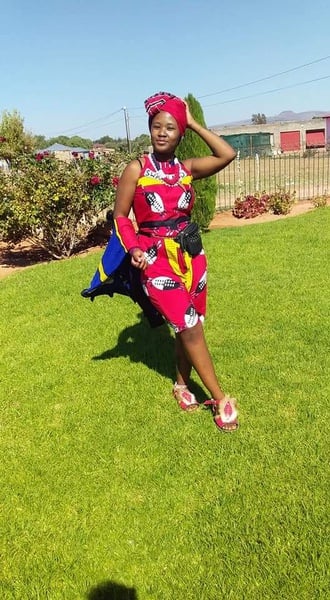 If you do not know who Spontae is, you are missing out . Spontae whose real name is Ipeleng Andreas, is a young female artist and a proud traditional healer from Batlharos in Kuruman. Ipeleng got her stage name “Spontae” in 2011 which was at first “spontaneous Carter” as she was a huge fan of Lil Wayne. Spontaneous for Ipeleng mean things that came naturally such as her talents and her gift as a traditional healer. Spontaneous was too formal for her and she then chose to go as Spontae.

Growing up, Ipeleng wanted to have a job that would bring stable income .She notes “I have always wanted to be a fashion designer, a teacher or a lawyer, yes I thought of music but I wanted a stable income”. Thus she is studying toward diploma in teaching early childhood and do music in her spare time.

Even though this young star finds the music industry so challenging, she has recently dropped two singles on YouTube, the Female King and Get Down. Her dream is to be known nationally and being referred to as a national Act. Ipeleng calls herself the female king and the song was influenced by the challenges she face as a female rapper. In this song Spontae show her flows and can actually rap better than male rappers, hence the song Female king.

“I was asked to go for “Female Queen “and I refused, simply because the word Queen is very common. If you listen to my second verse, you can hear that I have a flow and I can surpass a lot of male rappers out there”

Spontae has highlighted that there are good rappers and great lyrics but young musicians in Kuruman face many challenges in terms of getting resources, such as getting proper studios. Young musicians are not able to achieve their dreams. She has also noted that some of these musicians are not given the platform to perform, thus the need to get qualifications and make music as a hobby. “I am facing a challenge of not being able to put more effort in my work, having to hear critics about how I wanna be and not being booked”.

When asked what change she would like to see in the music industry, Spontae responded by saying that the change she would like to see is change in record label contracts terms and conditions more especially the part where the artist does all the job. This young artist encourages young musicians to do research before getting signed by any label. “This music industry is cruel ,you must have a plan when you go out to hustle, it’s a dog eat dog world”.