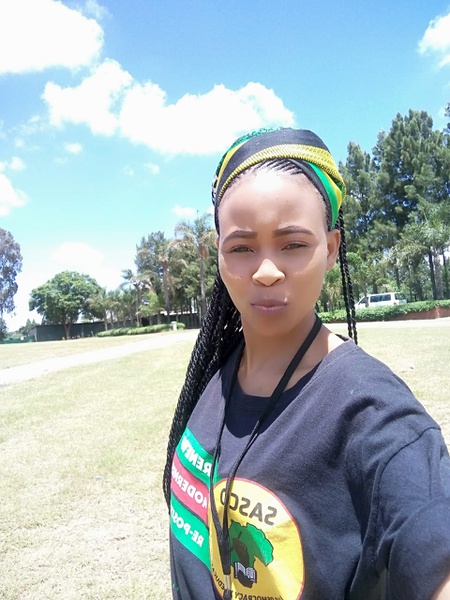 Segopotso Yvonne Kaotsane (26) is the reginal deputy secretary of the South African Students Congress (SASCO) and a student of Electrical Engineering at Kathu College. Born and raised in Washington, Northern Cape, Segopotso is a passionate and goal driven individual. She went to Galaletsang Science School in Mothibistad and after her matric, Segopotso went to study Electrical engineering at Kathu College where she first got involved in politics.

Being part of the student leadership, Segopotso have developed a critical thinker in herself and she believes her political awareness will help her to perceive the world differently. She has also learned many new important things in life such as understanding how the government works. Her experience as a student leader helps her organize her thoughts well and thus help her perform well in her studies. She also has noted that being a student leader, she is now able to use her knowledge to help others.

“SASCO organize students in higher learning institutions in order to achieve non-sexist, non-racial working class biased and a democratic educational system. The association has taught me to stand out as an individual and be able to take criticism positively as well avoid making uneducated assumptions in life,” explained Segopotso.

Segopotso added that education to her is crucial as learning about the world around us will not only help form informed opinions but it will also encourage us to change the world. However she has also noted that above all else God is her greatest inspiration, she believe she has a purpose in life and her goal is to serve that purpose.

It was in 2018 when Segopotso was elected as the treasure of SASCOat a branch level and her experience had a quiet an influence in her political journey. “I still remember how clue less I was, first of all I did not know what was happening about the portfolio and especially because I knew nothing about politics. I decided to grab the opportunity with both hands and challenged myself. I was willing to learn, so I started to read about a lot on politics, got as much information and knowledge as I could, by engaging with other politician’’, she said.

It was not easy for Segopotso to balance her political life with her studies but because she was committed to both being a leader and to her studies, she made it all worked. “Being part of extracurricular at college can delay some students academically, but in life we are forced to juggle things. I had to work hard , because I knew that I had two lives ,on the other hand students needed me to represent them and I also needed my qualification , so they were both important to me.I always made sure that I studied hard during exams, I would put my role at SASCO on hold, give other SASCO members work to do but also made sure that I oversee that students’ needs were satisfied”, noted Segopotso.

Segopotso has encouraged students to take part in student politics and have a voice. Her goal is to continue serving people, not only at college but at a community level and South Africa as a whole.

We wishes her all the best.