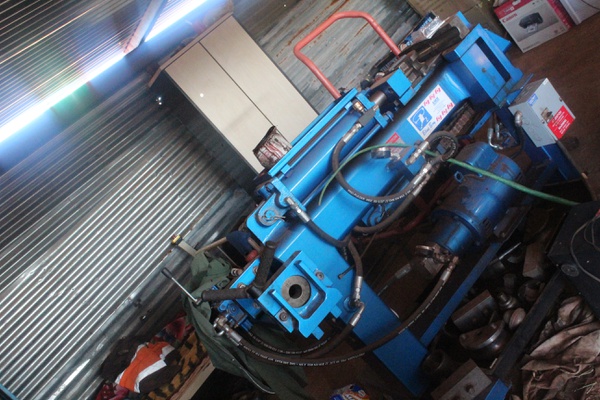 Mr Makatong known as Rre Kantoro established his Matlhaba Phefo Trading and Steels business in 2004. “There were a lot of breaking in the community and people would bring their things for me to repair” This influenced him and that is where the idea of working with steel came from.

Despite having faced the problem of not having the store room to keep his machines safe and money to keep his business running, Mr Makatong is always willing to compromise and understand that people do not have money. His business brings difference to his community; He has taken and trained 3 people. This people have been working with him for some time now. Mr. Makatong hopes to be able to supply and work with mines when he turns 50 years.

Even though his business is based in Bankhara, Mr. Makatong get support from other surrounding areas. He said, “My business does not only operate in Bankhara, I get support from Seoding, Mokalamosesane, 7 miles, Bendel even Kathu, so I also get more customers outside. I always tell people that in Matlhabaphefo trading and steel; I am who I am because of people of Bankhara and outside. I thank them for giving me support that ended up making me and support to do more things. All that led me to have big business that will run for many more years to come.”

Mr. Makatong has encouraged young people who want to start their own businesses. He said they should not to be scared or worry. They should believe in themselves and everything will work out, how it all works out is up to an individual. He has never got a chance to study but one cannot tell. “I never studied in my life but once you see the machines I am working with, you will be amazed and ask yourself how?

He also regards himself as someone who motivates young people.

“I am that kind of lecture that is here to motivate young people for example” One can see the product I use as an equipment but using it is another thing. You will read what is written outside the box and by the time you finish I will be done with the machine that is inside the box”, I tried to study but I could not read and write. However, Mr. Makatong hired people to do his paper work reducing unemployment in the community of Bankhara. He believes God gave me this talent. To everyone who wants to be whatever they want be. Follow your heart and the universe will open for you.