He was born in Kuruman (Mothibistad), in a family of four siblings, with 2 sisters and one brother. 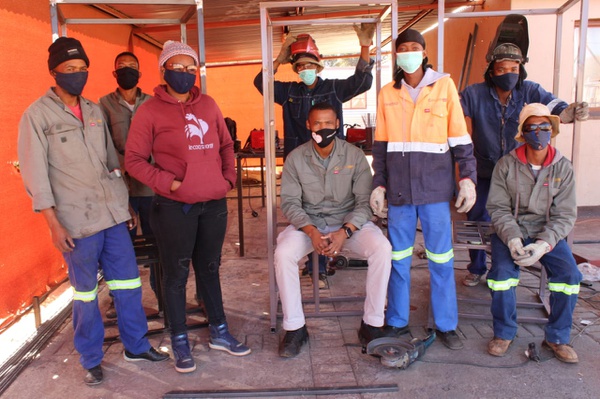 Tshepiso Blessing Fillies (31) from Kuruman in Mothibistad, is a senior sample processor at Khumani mine, a husband and a father of two boys. Tshepiso owns a steel based company called Fillies Enterprise and Services. He was born in Kuruman (Mothibistad), in a family of four siblings, with 2 sisters and one brother. Tshepiso grew up without his parents and he was raised by his grandparents. He started schooling at Isagontle Primary and completed his matric at Galaletsang high school, to further he went to Joe Morolong Camps study boiler making. Tshepiso worked as a general worker at UMK Mine as his first job for a period of 3 years, and lost his job through retrenchment. Tshepiso refused to let unemployment define his destiny and decided to start working from home designing braai stands, burglars and devil forks installation. He then later got a job at Khumani Mine as assistant Boiler Maker for 4 years and was later appointed as a senior sampler processor where he is currently at.

His company was first opened in 2012 and got it registered in 2015.The company is based in Kuruman (Mothibistad) and specializes with steel based on different scales of work. Some of the things they do is installing Devil Forks, Designing Gates, Window Burglars, different stands including (Sanitizer stand, water stand and chemical stands) carport and more as well as construction building and paving.

When asked about the influence he had to start his own business,Tshepiso mentioned that his plans for starting a business was  merely to make an extra cash for petrol and food not to start a company, but as it turns out the business grew to a put where he had to build a name and a brand for himself. Tshepiso has 6 people as his employees who are in a 6 months contracts and 10 people who are temporary at one of his projects that he is currently busy with at the moment. Like most small company owners, Tshepiso face challenges in his business but he always find a way to overcome them somehow. “There are lot of challenges one face in this field, from waiting for payments for months, having people to deal with who have different views about what you do and most of all cash falls and finances. I overcome my challenges because I have people I can talk to and trust, people that can help with advice. Business is like you are in an ocean. You will be faced with different storms and the ocean is not stable you need something to hold on to “explained Tshepiso. He plans to continue creating jobs and change people’s lives.

To get in touch with Tshepiso regarding his business one can visit their Facebook page @fillies enterprise and services.